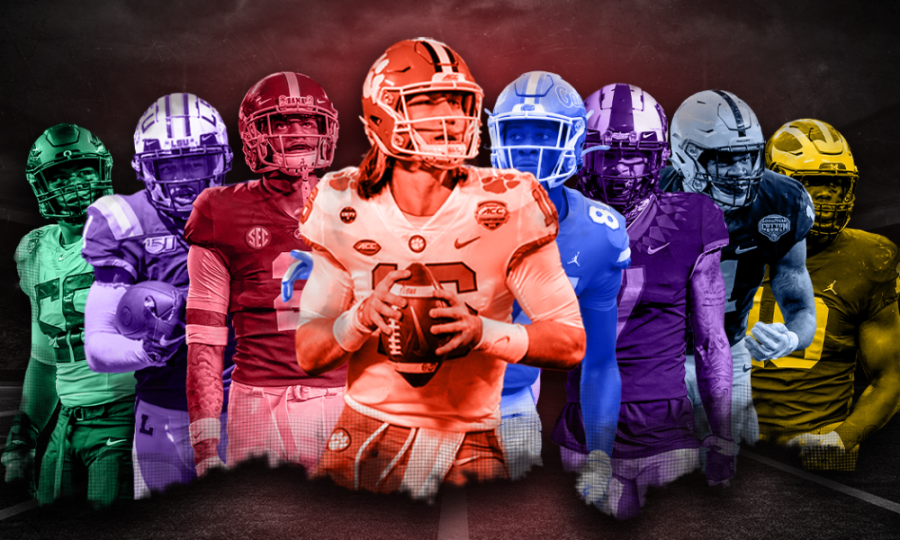 The NFL Draft is days away and I decided for my second to last mock I would do a wild two-round mock.

Let’s face it, the draft is going to be wild and no one knows what is going to happen, I think all the scenarios depend on how the 5 QBs fall and who wants them.

Lots of trades, 8 QBs go in the first two rounds, and the Patriots being sneaky once again, it’s all here in my two-round mock draft.

Talk about what could be a complete overhaul to a roster that only won one game last season. With Urban Myer at the helm, the Jaguars take their future in Lawrence. They will need to surround him with protection as the Jaguars had one of the worst o-lines last season. Cosmi and Dickerson are two cornerstone players who can protect Lawrence for years to come. Dickerson at center would cement that position for the Jags if he can stay healthy as he tore his ACL last season.

Small, but explosive, at 5”7 Moore would add toughness to the receiving corps in Jacksonville. He could be a lifeline for Lawrence almost like Welker and Edelman were for Brady.

The Jets are hitting the restart button again in 3 years after drafting Sam Darnold and the talk is Wilson at number two. Wilson would replace Darnold and would bring his athleticism and incredible playmaking ability to New York and be the savior everyone has been waiting for since Joe Namath.

The Jets would be lucky to land Virginia Tech’s Caleb Farley. With a back injury that could send him sliding, Saleh and the Jets in dire need of a corner take a chance on Farley who has tremendous man cover skills and amazing speed. Saleh wants guys who can dig it out on their own and Farley is that guy.

Creed Humphrey is like a massive brick wall, at 6”5 over 300lbs Humphrey stood up defenders and has amazing balance. He will finish players and drive them to the ground. He would provide much-needed stability to the Jets o-line and be Wilson’s partner for years to come.

I had the Jets trading back into the end of the second round to pick NC state’s, Michael Carter. The Jets already have a packed room of young backs, but in an offense that utilizes the backfield a ton, having a dynamic back like Carter who can also be a receiving back is a big plus.

The 49ers could go in almost any direction when selecting a QB at No. 3, but Trey Lance fits the mold well in San Fran. Lance is a dynamic player who has a lot of upside and potential. If the 49ers want to have someone sit behind Jimmy G for a year and develop and learn it would be Lance. He is the riskiest QB in my mind in this class because fans have only seen him play one season at NDSU, but he has the risk, reward factor. In a stable, structured organization, Lance will have plenty of opportunities to thrive and grow.

At 6”6 270lbs, Payton Turner was a staple for the Houston Cougars. A dog in the run game, he would add yet another element to that already insane 49ers d-line.

I have the Broncos traded up to select Fields and move from 4 to 8. The Broncos have been interested in bringing in a QB all offseason and a player like Fields just can’t be passed up upon. Fields had 41 TDs back in 2019 and back in December, he excelled his team past Clemson to the National Championship game.

Zaven Collins is a linebacker with full range. The Broncos do not have a premier linebacker and Collins paired with coach Vic Fangio would be so beneficial to the Broncos D. He is an all-around player and what I mean by range is he can play in coverage. I mean the stats speak for themselves in his 2020 season. Collins had 54 tackles, 4 sacks, 2 forced fumbles, 4INTs, and he even had 2 TDs.

Let’s just face the facts here, Joe Burrow was hurt badly last season by the Bengals o-line as he tore his ACL and missed the rest of his rookie season. The Bengals o-line was ranked fifth in the league last season in sacks and they have to protect their franchise QB. Sewell is a surefire prospect and the safe pick. I was very tempted to select a skill position like Jamar Chase, but the Bengals’ need at o-line is just too big and Sewell is so young and such a powerhouse with crazy athleticism that the Bengals should not pass up on a player who will be a foundational tackle.

Davis out of Ohio State would add even more protection to Burrow on that offensive line. Another massive body for Burrow to throw behind and an All-American as well in 2020.

What more of a weapon could Tua Tagovailoa ask for in Kyle Pitts. An absolute giant at the tight end position, Pitts can line up almost anywhere on the field and that would be a nightmare for opposing defense and such a mismatch. With Gesicki, Parker, Fuller, and Pitts Miami just got more dynamic.

AVT the tackle out of USC could probably play guard for Miami if they wanted him to. A versatile offensive lineman to protect Tua. Jaelan Phillips has both the size and the skill to play edge for any team. He had to take a break from football at one point in his career due to concussions, so injury is a risk, but there is a ton of upside. Phillips stats: 8 sacks and even an INT last season.

A team that lost a lot of offensive firepower and needs that restored can select Jamar Chase. A 2020 opt-out, but in 2019 Chase had 84 receptions, almost 1,800 yards, and 20TDs. Chase even received the 2019 Biletnikoff Award for the most outstanding wideout in the country.

Rousseau would provide an interesting presence to the Lions defense. The Lions are filled with holes, but Rousseau might be capable of filling one of them. Rousseau had 15.5 sacks in 2019, and at 6”7 he is enormous, but yet another 2020 opt-out and we will see where teams rank him and we will see if opting out affects him at all.

Not the first fit that always comes to mind in people, but Washington will probably select a QB at one point in this draft. A very young and talented team who is currently being led by Ryan Fitzpatrick, I feel as though they are one young QB away from breaking out as a team. In another structured and well-nurtured system for a young QB to come in, Jones could be mentored by Fitz and be walking into a great situation with Ron Rivera.

Dyami Brown will play physical at the receiving position and stretch the field as well and would add to McLaurin, Samuel, Humphries, Thomas, and Gibson. This offense with defense would be scary, the only thing that the WFT team now is a tackle and a linebacker.

The Falcons were getting gassed, smoke, whatever you want to say, well that happened to the Falcons secondary last season. I see this as a competitive team with Matt Ryan and the defense kept them out of a lot of games, the offense to me is much much more established and ready to compete. Surtain seems to be the best corner in the class and his cover skills go unmatched and the Falcons would be upgraded big time with him on the roster.

Todd Gurley did not work out last season for the Falcons. Najee Harris is a young back with crazy skill and determination. His highlight was when he hurdled Notre Dame’s McCloud in the playoffs. Harris would be a hard nose and elusive back and defenses would be on their heels.

I had the Ravens trading up big time to select Smith. Why may you ask? Well, Smith is a clear-cut star and has all the makings of being an elite wideout. Teams question his frame at 166, but he is a playmaker and the Ravens would be making a big statement by selecting a player of his caliber and would show Lamar Jackson a sigh of relief from the worst-ranked pass-catching group since he entered the league.

Check out the rest of my mock here in my all-new sports radio talk show on WOCC. Find out why Davis Mills is going to the Pats and so much more on my new two-round mock.

*Chiefs, Ravens Trade at the end of the First Round, not reflected in this mock*